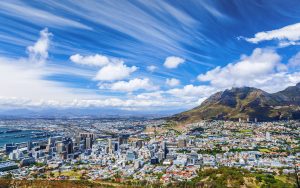 As populations grow, cities across Africa are increasingly implementing tech and data-driven solutions to tackle urban development and sustainability challenges.

For a while now, smart cities have been seen as a solution to addressing urban challenges and bridging digital divides across Africa.

Throughout the past decade, we have seen a certain ease of implementing newer technologies across Africa as cities often do not face challenges and costs associated with maintaining legacy technologies. Impactful tech solutions are currently being developed and scaled quickly and efficiently.

The rate of urbanisation and growth of Africa’s middle class is also seen as solid predispositions for developing smart city technologies. Africa’s middle class is rapidly growing as a result of economic growth and better job opportunities. According to Mthuli Ncube, African Development Bank Chief Economist, the middle class drives economic demand across Africa. Africa is also expected to have the highest urban growth rate globally – 950 million people by 2050.

Although the promises of smart cities may be appealing, in reality, ICTs need to be implemented with care in a sustainable, citizen-led manner as Africa’s population grows. If they are not, they could increase the digital divide in Africa and hinder the spread of innovation across other regions.

We are strong advocates for using ICTs to foster economic growth in cities. That said, this really needs to be done in a manner that puts citizens at the centre. Technology is a vital enabler, but communities are the ones fostering sustainable economic growth.

Welcome to our Cities in focus series, where we explore exciting developing tech ecosystems.

“This is a caring city, but more so, Cape Town is an opportunity city and we are open for business.” says Tim Harris, CEO of Wesgro, Cape Town’s official tourism, trade and investment promotion agency.

Over the past 20 years, Cape Town’s ecosystem development strategy has definitely paid off.

Cape Town is a top tech and startup ecosystem and is now one of the fastest-growing regions for FDI, according to Wesgro and a report by fDi intelligence and the research firm Briter Bridges. The city has been very proactive in providing the necessary infrastructure for building a thriving tech ecosystem.

Cape Town is one of the leading ICT deployment cities in Africa. This is primarily due to the government’s recognition of the importance of ICT in urban development and governance at an early stage.

The city’s  open data portal, the first of its kind in Africa, promotes economic opportunity and involves residents and broader stakeholders in local government. ICT is being used to tackle city-specific challenges such as exposure to fires, water deficiency, waste management and electricity supply. Real-time data is being used to improve emergency responses to fire and rescue. Sensors have been installed throughout the city to keep track of water leakages and ensure daily water quotas are not exceeded. Local regulators are planning to use IoT technologies to extend government services and benefits and address overpopulation challenges such as access to healthcare.

Cape Town is also one of the cities on the 2020 CDP Cities A list – cities received the highest ranking for their efforts to reduce greenhouse gas emissions and build resilience to the impacts of climate change.

The city is home to 60% of South Africa’s startups. Entrepreneurs choose Cape Town over Johannesburg and Bloemfontein for a number of reasons. Cape Town has one of the largest open access fibre networks and the highest number of accelerators in Africa. The city’s lifestyle and lower living costs are attractive to the tech community. Moreover, the cost of talent is lower than that in developed countries, while tech salaries are higher than in other African tech hubs like Cairo and Lagos.

Cape Town’s nationally funded Innovation District, The Fridge, focuses on the integration of education and business as well as building a solid technology innovation community. The city-funded Cape Innovation and Technology initiatives have supported more than 3,000 entrepreneurs and turned out more than 2000 businesses since it was founded in 1999.

One of Cape Town’s success’s key factors is its talent ecosystem – The Cape Town – Stellenbosch corridor is home to 450 tech firms, which employ more than 40,000 people, making the ecosystem bigger than that of Nairobi and Lagos combined. 38% of South Africa’s developers are in Cape Town. The city also has many digital skills training academies and attracts international edtech businesses from around the world.

Government initiatives and projects such as the Technology Venture Capital Fund set up by the Department of Trade, Industry and Corporation have helped boost innovation and provide startups with support for developing innovative products, processes and technologies.

Cape Town’s challenges in becoming a developed tech hub are not different from the challenges that most developing tech hubs face – access to talent and funding.

One of the talent specific challenges that the city faces is a lack of experience, particularly in scaling businesses. This is because many tech entrepreneurs are new to working on high-growth startups and are learning on the job. According to Tanaka Mutakwa, vice president of engineering at Names & Faces, there is a need for entrepreneurs to access a network of experienced founders who can guide and mentor local founders.

As in other developing tech hubs, startups based in Cape Town face competition in the face of established businesses and corporates as they usually offer talent higher wages and provide more job security.

Although global conglomerates like Microsoft, Google and Oracle have brought funding into South Africa, more funding for local companies is needed. It is challenging for ventures to raise capital in the early stages of development, especially when founders are not connected to angel networks or don’t have family backing, says Fabian Whate, head of Naspers Foundry.

Cape Town has the potential to turn into an international tech hub as access to funding and talent improves. However, it is important that startups address the scaling challenges by expanding across Africa and then global markets.