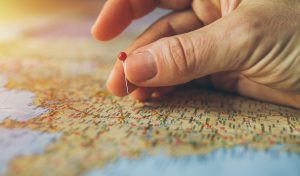 Place-based economic development approaches have been gradually spreading across different areas of policy-making and governments levels around the world.

Although place-based thinking is not new in regional and urban economic development, regulators and scholars were more focused on developing aggregate macroeconomic policies and frameworks during the first few decades of the post-war era.

It wasn’t until the 90’s that place-based theories gained more momentum. Cities were recognised for providing the links between trade and economic growth, while local economic activity clusters were seen as a vital force driving national economies.

Although the theories that emerged differed, they all found that knowledge exchange, spillovers and diffusion were important driving forces of economic growth.

Around this time, globalisation, the process that would forever change global economic development, began.

The fall of the Berlin Wall and the collapse of the Soviet Union expanded the European economy. The global labour market widened with the opening up of the BRICS economies and Indonesia and South Africa. The establishment of the EU Single Market, NAFTA, WTO and the internet led to big outsourcing waves from developed to developing countries.

As technology advanced, it became much easier to outsource jobs of a routine and repetitive nature. However, it became much harder to outsource and offshore jobs that required higher levels of education or cognitive skills. Mid-level positions began to disappear, leaving primarily high and low paid jobs, and the process of job polarisation began. Mid-level workers now had to compete for lower-paid opportunities, whereas high-skilled workers benefited from the effects of globalisation.

The process of job polarisation occurs on both a national and a place basis.

Patterns of growing interregional inequality in the face of globalisation started to emerge in many countries in the ’90s and early 2000s.

Due to the unprecedented nature of the global economic changes, both in terms of speed and scale, regional and national policy-making was slow to adapt, further increasing economic and development inequalities.

Today, due to the dynamic nature of our economic and technological development landscape, private and public sectors are better equipped to adapt to change.

Over the last couple of years, we already see increased emphasis on place-based thinking.

Place-based innovation is key to addressing regional and national inequalities and stimulating productivity.

R&D, innovation, knowledge generation and transfusion are essential for economic development and growth of places.

In today’s world, a region’s success is no longer dependent on a single industry but rather on cross-sector collaboration and open innovation.

The two essential ingredients of prosperous, inclusive and sustainable place-based innovation are collaboration and co-creation between government, industry and academia.

Innovation takes place in collaborative environments, in which people are free to share skills and ideas.

Today’s knowledge-led economy requires that institutions and companies cluster and connect with startups, incubators and accelerators to transfer knowledge.

Innovation Districts are critical drivers of place-based innovation precisely because they facilitate cross-sector collaboration by bringing people from different backgrounds together to co-create solutions.

They have the power to reshape and regenerate places by creating and attracting high-quality jobs and supporting inclusive growth. These districts provide opportunities for knowledge organisations and employers to engage with communities in meaningful ways.

Innovation hubs increase access to learning and career opportunities. As more jobs become automated and new jobs are created, hubs will play an essential role in providing people with training and knowledge exchange opportunities to thrive in the new economy.

Innovation districts help places and cities create new products, processes, technology and scalable, innovative businesses which help boost economic growth. This is why regulators need to focus on developing policies that create the right conditions for places to thrive.

A more equitable and sustainable future requires place-based innovation and collaboration between industry and different levels of government.